Just one of those stories that make you chuckle when warmists accuse sceptics of not knowing anything about science. The popular alternative left-wing website, Disinfo.com, chose to illustrate a story about global warming turning Antarctica tropical with a picture  . . . of a polar bear. 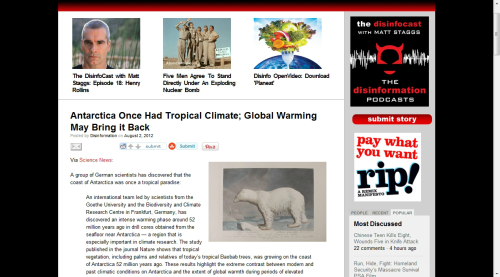 Disinformation indeed! Global warming will apparently cause polar bears to migrate to Antarctica. Or something.

Publicising the post on their Facebook page with the headline “Polar Bear Luau!”  in reference to the festival on the semi-tropical Hawaiian archipelago, Disinfo.com linked to a ScienceDaily story about Antarctica once being a tropical paradise, and warning that it may become one again, thanks to global warming.

Discounting for a moment the rather unusual fact that a story which confirms that the earth’s coldest place was once tropical before SUVs is used to warn of the so-called “dangers” of global warming, choosing to illustrate that story with a picture of an animal that lives literally on the the other side of the world is more than a little embarrassing for a website which promises to tell you the truth about the world under the slogan “Everything you know is wrong”. Indeed.

Disinfo’s Facebook post. The polar bear looks a little confused. Perhaps he’s wondering why he’s on the wrong side of the world?

This isn’t the first time warmists have warned of the effect global warming will have on the phantom polar bears of Antarctica. Only last year HauntingtheLibrary noted a similar story which warned that “The entire planet is affected by global warming, and polar bears in Antarctica aren’t the only ones facing changes”.

So, a simple request to all warmist publications out there: before accusing us sceptics of scientific illiteracy, could you at least locate your trophy animals in the right hemisphere? Or is that too much to ask?

This entry was posted in Uncategorized. Bookmark the permalink.